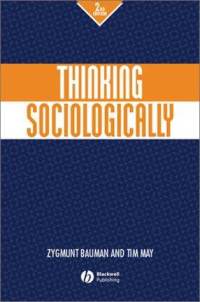 I've spent the last few days with food poisoning and scrambling to catch up with work, but in that period of time I had the chance to read Zygmunt Bauman & Tim May's Thinking Sociologically.

Like the academic nerd that I am, I'm always on the lookout for good introductions to sociology that I can recommend to folks, either to undergrads who want a slightly more in-depth explanation of the discipline, or to friends and family members who I want to torment with demands that they have at least a basic understanding of what it is that I do (although the latter has yet to actually work on anyone). My go-to book in the past has been C. Wright Mills' classic The Sociological Imagination, and though it's still a favourite, the middle chapters are getting slightly dated. Most sociology students these days never have an encounter with the work of Talcott Parsons or Karl Lazarsfeld; as entertaining as Mills' critiques of these mid-century giants is, its borderline irrelevant to the incoming generation of sociology students.

On the other hand, most introductory sociology textbooks follow the tried and true "subfields" method of organizing the discipline: a chapter on stratification and inequality, a chapter on race and gender, a chapter on organizations, a chapter on social movements, and so on and so forth. I've always hated those textbooks for two reason. First, they orient the mental frameworks of students toward dividing sociology into neat little categories that don't intersect. In my view, this promotes an extraordinarily atheoretical attitude among sociology undergrads (as well as some sociology professionals!) and relegates classical sociological theory to the dustbin of irrelevance, mostly for being 'too broad'. Second, they're often brutally out of date when it comes to introducing readers to up-and-coming theoretical perspectives. I've only very rarely seen intro texts that provide a place for network theory, for questions about risk, or for ethnomethodological or dramaturgical approaches -- most texts don't seem to know what to do with a Garfinkel or a Goffman, and so leave them to the sidebars. This isn't the only way to approach introductory sociology, but it seems to be the dominant organizational strategy in North America -- particularly in the United States.

Bauman and May eschew this approach in favour of a looser organizational style. Thinking Sociologically is divided into two substantive parts -- "Action, Identity and Understanding in Everyday Life" and "Living our Lives: Challenges, Choices and Constraints". Under these headings are chapters like "The Bonds that Unite: Speaking of 'We'", "Time, Space, and (Dis)Order", and "The Business of Everyday Life: Consumption, Technology, and Lifestyles". Each chapter deals with two or three major theorists who touch on these topics (broadly construed), as well as pointing the reader towards other work -- both traditionally sociological work and pieces from other social science disciplines -- that expands on the themes of the chapters. I found myself extremely happy to turn to the back of the book after Chapter Five (on gifts, exchange, and intimacy) and find both Ulrich Beck's Risk Society and Arlie Hochschild's The Managed Heart as recommendations for further reading. In a traditional US sociology text, the Hochschild book would end up in the "Gender" chapter, and the Beck book probably wouldn't appear at all.

My favourite part of the book, though, is that it actually follows through on the promise of the title. Like The Sociological Imagination before it, Thinking Sociologically focuses on what it means to approach questions in a sociological way. Rather than bounding the discipline by providing a list of "sociological" topics, Bauman and May spend the introduction exploring the idea that what makes sociology different from the other social sciences is not its subject matter, but rather its way of thinking about the world. Toward the end of the introduction, Bauman and May write:


Sociology stands in opposition to the particularity of worldviews as if they can unproblematically speak in the name of a general state of affairs. Nor does it take-for-granted ways of understanding as if they constituted some natural way of explaining events that may simply be separated from historical change or the social location from which they emerged...It demonstrates that the common metaphor of the motivated individual as they key to understanding the human world -- including our own, thoroughly personal and private, thoughts and deeds -- is not an appropriate way to understand ourselves and others. To think sociologically is to make sense  of the human condition via an analysis of the manifold webs of human interdependency -- that toughest of realities to which we refer in order to explain our motives and the effects of their activation.

May and Bauman focus on the power of sociology to be an antifixating discpline, one which "renders flexible what may have been the oppressive fixity of social relations", thus widening the scope of human freedom. This is an emphasis which is sorely lacking in mainstream sociological texts, for reasons unclear to me. In representing sociology as a domain of widened possibility, rather than as a stringent set of areas to be studied, Bauman and May make thinking sociologically relevant to non-specialists as well as professional sociologists.

In The Sociological Imagination, C. Wright Mills lays out a project for sociology:

The sociological imagination enables us to grasp history and biography and the relations between the two within society. That is its task and its promise. It is the characteristic of Herbert Spencer--turgid, polysyllabic, comprehensive; of E.A. Ross--graceful, muckraking, upright; of Auguste Comte and Emile Durkheim; of the intricate and subtle Karl Mannhein. It is the quality of all that is intellectually excellent in Karl Marx; it is the clue to Thorstein Veblen's brilliant and ironic insight, to Joseph Schumpeters's many-sided constructions of reality; is is the basis of the psychological sweep of W.E.H. Leckey no less than of the profundity and clarity of Max Weber. And it is the signal of what is best in contemporary studies of man and society.

In large part, contemporary man's self-conscious view of himself as at least an outside, if not a permanent stranger, rests upon an absorbed realization of social relativity and of the transformative power of history. The sociological imagination is the most fruitful form of this self-consciousness. By its use men whose mentalities have swept only a series of limited orbits often come to feel as if suddenly awakened in a house with which they had only supposed themselves to be familiar. Correctly or incorrectly, they often come to feel that they can now provide themselves with adequate summations, cohesive assessments, comprehensive orientations. Older decisions that once appeared sound now seem to them products of a mind unaccountably dense. Their capacity for astonishment is made lively again. They acquire a new way of thinking, they experience a transvaluation of values: in a word, by their reflection and by their sensibility, they realize the cultural meaning of the social sciences.

Thinking Sociologically is a work that fits squarely in the tradition of Mills' project, and in that capacity, I wholeheartedly endorse it.

Sarah Gram
Sarah is an ex-sociology PhD student, currently underemployed at a technology retailer. She's interested in knowledge, technology and gender -- and video games and music and the internet. Right now she's trying to live an actual real adult life, and this blog is a good excuse to procrastinate on all of that.