Every once in a while, especially when I'm in the generally stressed out state that grading puts me in, I like to turn on a documentary on good ol' Netflix. I've been a documentary hound for as long as I've been a non-fiction reader, but the stressed-out documentary choice has one very specific requirement: it can be about anything, as long as it's quiet.

Two nights ago, I found the perfect film for this purpose. Rivers and Tides is a joint Irish-German production about Andy Goldsworthy, a sculptor and environmentalist whose site-specific land art is some of the most beautiful I've ever seen. Working only with natural elements, Goldsworthy creates pieces that explore the ephemerality of nature and time, and often end up consumed by very environments from which he draws his inspiration:

As a sociologist who works primarily in the realm of the digital--and certainly in the realm of the modern--I don't often get the opportunity to think rigorously about nature. About the closest I manage is reading about mediated landscapes, or the social construction of frontiers. I also don't get a lot of time to think about art, although it comes up slightly more often. In spite of--or perhaps because of--this, I found myself riveted for the full two hour exploration of Goldsworthy's art. Early on in the film there is a sequence in which he attempts repeatedly to build one of his famous stone seeds, conical structures build from flat rocks. Three times in a row, the sculpture falls apart, and each time the tide on the beach where he is working comes closer to where he sits. The final product, eventually completed, ends up completely subsumed by the water of the bay, only to be revealed again when the tide recedes. It is both an astonishingly slow process and one in which we are reminded of constant movement of time.

Much of Goldsworthy's work is less permanent; he often works in ice, in leaves, and in sticks, in places not amenable to permanent structures. This type of impermanence in art can often come across as whimsical, but Goldsworthy's commentary throughout the film shows that he is interested in the ephemeral not because it is pretty, but because it is a window into collaboration with nature. 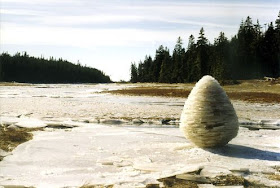 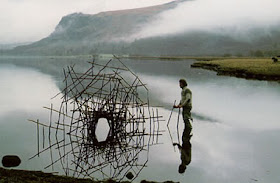 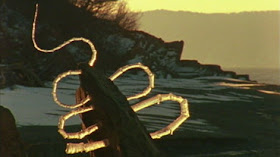 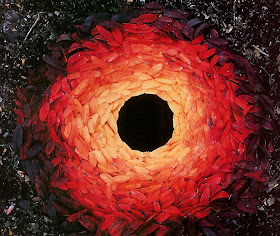 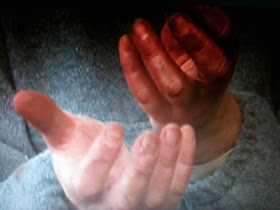 In a week where I've spent the majority of my work time thinking about technology, risk, and retaining a sense of 'place'-fulness in theories of the virtual, and most of my play time reading Rutsky's High Techne and Tichi's Shifting Gears (both about technology and art), Rivers and Tides was a profoundly beautiful reminder that the modern can be natural, and that the ephemeral and the eternal are as present in nature as they are in culture.